The Third Way of the Qur’anic Jesus

What can the Jesus of the New Testament teach Islam?

This article was published in Oasis 25. Read the table of contents 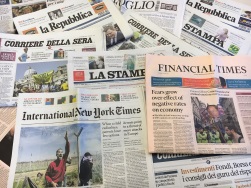 Last April, Pope Francis flew to Cairo to meet the Grand Imam Ahmed al-Tayyib, sheikh of one of Sunni Islam’s most prestigious institutions. The invitations to form a single, united front against violence and terrorism are multiplying but, very often, the atrocious attacks and the ongoing conflict in the Muslim world (but not only there) tell of a reality in which the chasms of incomprehension separating the great monotheistic religions outnumber the attempts at dialogue.

In such a context, The Islamic Jesus – the latest work by the Turkish writer and journalist Mustafa Akyol – is therefore intriguing. Presenting a rigorous reading of the Jewish, Christian and Muslim traditions’ sources, the book places the figure of Jesus at the centre, as the element that these three great monotheistic religions have in common.

Aykol states his objective immediately, in the introduction:

I will explore how the three great Abrahamic religions of our battered world, despite all the past and present tensions between them, come together at the story of this most amazing man – this Jesus of Nazareth. Whether we are Jews, Christians or Muslims, we share either a faith followed by him, or a faith built by him, or a faith that venerates him (p. 8).

If, for Christians, Jesus Christ was born of the Virgin Mary, died and rose again and is the Son of God, for Muslims, Jesus the son of Mary is a venerated prophet enjoying a special place in the Qur’an. His divine nature is not recognized, however. In between, according to Akyol, there would be the position of the Judeo-Christians, namely, those members of the Jewish people who recognised Jesus as the awaited Messiah but, in opposition to Paul, remained bound to the Mosaic Law. After crystallizing in Jerusalem during the first century, their creed disappeared over time, only to reappear in a very similar form in seventh-century Arabia, in the time of Muhammad (although Akyol himself admits that the historical evidence to demonstrate a direct connection is lacking).

Drawing courageously and perspicaciously from a century’s studies on the Qur’an’s context, Akyol does not limit himself to attempting to build links between the three monotheistic religions around the figure of Jesus, however: he provocatively raises a question that is closely connected to the present day. What – he wonders – can the Jesus of the New Testament teach Islam? The author draws a comparison. And, to do so, he goes back to theories formulated by the British historian Arnold Toynbee who, in 1948, in his book Civilization on Trial, described a crisis within Islam (as did Bernard Lewis, later, in The Crisis of Islam: Holy War and Unholy Terror): an Islam in decline and frustrated by a West that was increasingly competitive socially, culturally and technologically. In their subjection to the power of Rome, the Jews in Jerusalem had found themselves in a similar position during the first century BC, wrote Toynbee. This condition of extreme socio-cultural frustration had thus resulted in the creation of factions: those who imitated the Romans (the Herodians) and those who, on the other hand, brandished their weapons and advocated a fight to the death, with the ultimate aim of establishing an earthly kingdom characterised by a close adherence to the religious law (the Zealots).

In Toynbee’s wake, Akyol compares the former to Kemal Atatürk’s brand of secularists and the latter to the jihadists arguing for a hyper-literal reading of the sacred texts. But he adds that, in the case of ancient Jerusalem, Jesus comes precisely to destroy this dichotomy. And in this would lie the current relevance of his teaching for Islam: without siding with Rome, Jesus taught that faith is not lived in strict observance of the religious law and a political project. The “Kingdom of God” – the “Caliphate”, in the comparison with modern Islam’s fundamentalists – took the form of an earthly kingdom for the Zealots but Jesus corrects this: “The kingdom of God is within you”, as Lk 17:21 repeats in one of the possible translations from the Greek.

Side Effects of the Oil Bonanza

Petrodollars: opportunities and risks for the Gulf monarchies

The Theologian You Don’t Expect

Excesses and contradictions in Ibn Taymiyya and his thought

The Alliance that Stifles the Muslim World

The historical roots of the crisis in Islamic civilization

When the Strong State is not a Just State

Contemporary Arab regimes and their inability to build a nation